Ants in native american folklore & art
The Hopi People of the American Southwest are very reverent of ants, because their creation myth tells of how the Ant People saved them from total destruction when the last world ended and this world began. Hopi Petroglyphs in what is now the Four Corners region of New Mexico, Arizona, Colorado and Utah depict scenes from this story and illustrate the artist’s interpretations of the Ant People legend. Dances and rituals that tell this story are still performed by Hopi people to this day.

The Hopi Story of the Ant People describes a lush, beautiful and paradisiacal world that preceded the one we live in now. The Hopi lived in the first world, but their lives were too easy and they were very lazy. A great cataclysm came and the first world came to a violent end, but the Ant People invited the Hopi to come live underground with them where they would be safe. The Ant People fed the Hopi and taught them many things. The Hopi learned to build their dwellings into the rocks, and to grow food with very little water, but they also learned about the stars and mathematics. When the destruction had ended, the Ant People took the Hopi up to the surface to show them the second world. The Hopi were able to live in the harsh desert that was there new home, thanks to the skills that they had learned from the Ant People.
The Hopi legend of tokpa, the second world 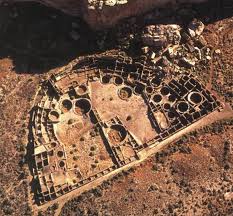 In recent times, some people have interpreted the Hopi Ant People Legend as evidence of interactions between extraterrestrials and indigenous cultures.
Powered by